I picked up this chalkboard at a thrift store recently. I didn't take a before picture, but I'll tell you it was ugly. It would have been better if the previous owner had left the frame as bare wood, but for some reason they decided to paint it a hideous brown. In the Crayola box I think it would have been burnt Sierra. I thought about replacing the cork board because there are colored chalk squiggly lines on it, but in the end decided to leave it as is. It's going to be mostly covered up anyway. Plus it looks like pretty much everything else around here that the kids have put their own special touches on. 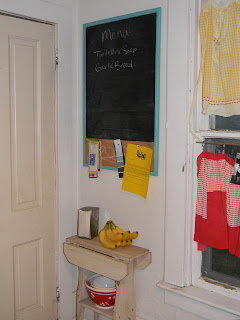 I put a couple of coats of an off-white spray paint on the frame before applying the blue. Then I roughed it up quite a lot. I had envisioned this going in my bedroom, but it looked really good in the kitchen. ﻿ 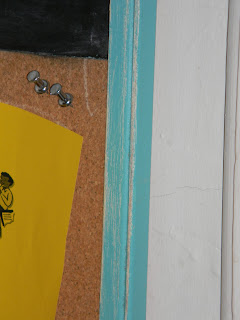 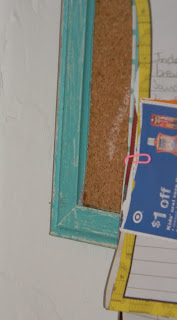