﻿
Last week I unexpectedly found some time to do a little thrift store shopping. It didn't begin well as the first thrift store was rearranging which made it difficult to shop at so I left. The second thrift store didn't even appear to be open as there were no cars parked outside. It looked like a sign was posted in each window, but I didn't stop to see what it said. Instead, I went to the other side of town to one of my favorite thrift stores. I think the thrifting gods were with me that day, because my bad luck quickly turned to good. I found some great deals and I spent less than $20.﻿
﻿ 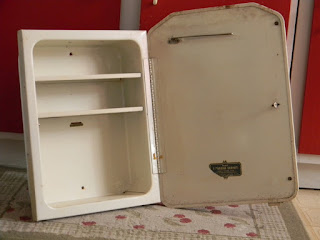 I have always wanted an old medicine cabinet, but have never found one that I really liked in my price range. I finally found this metal one. The glass on the outside is perfect and there is a cool label from Montgomery Ward in the inside. I haven't decided what I want to do with this yet. I may keep it until we redo the bathroom or I may use it my crafting area.﻿ 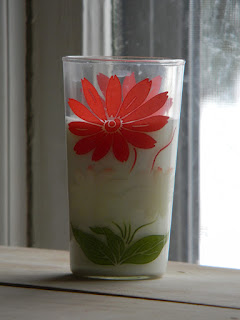 I've been chucking all our little kids plastic cups and getting nice glasses instead. I've been finding some nice vintage glasses that stand the test of time instead the ones sold in stores that break so easily. I found this juice glass which my daughter quickly claimed as her glass. 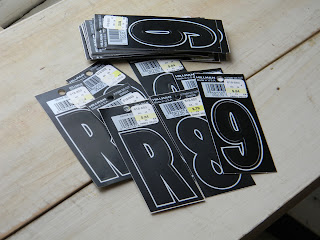 Numbers and letters for some future project. 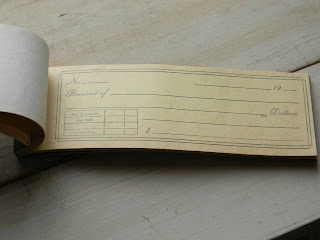 Not sure what I'm going to do with this old receipt book either, but I'll find a project for it someday.﻿ 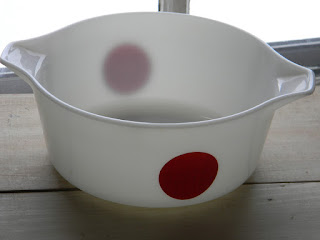 And my find of the day. To think I almost didn't buy it. I tend to be very cheap while thrift store shopping and I have a pet peeve about stores jacking up prices on things they feel are collectible or antique. It is Pyrex, but I thought it was a little weird looking with the one dot on each side. I mulled it over while I walked down an aisle and then ran back for it. What was I thinking? It's Pyrex. It's red and white. Just buy the thing already! I figured if I saw it in an antique store it would be much more than I paid for it at the thrift store.
I'm so happy I did buy it. After I got home I did some research and found out it's a pretty sought after piece. I found conflicting info, but I do know it is the Moon Deco pattern. Mine does not have the lid, but frankly the lid is really ugly. Still, I'll keep a look out for one to complete my set. My dish is in great shape and it looks great in my kitchen. I would have been kicking myself later had I not bought it.
﻿
Posted by Stacy at 11:15 PM