Where in the world

My younger son loves to go to antique stores with me. He has a few favorite things that he is always on the lookout for. One of those things is globes. Globes aren't hard to find, but the older ones are usually more than I'm willing to pay. I tell my son to be patient which is not easy for him. I know it's hard, especially when it's something you really want. However, it never fails. If you wait you will be rewarded. Usually when you're not even looking.
That's how we came across this gem of a globe. We found it at the annual St. Mary's carnival for a whole $5. It looks like a globe that could have been used in a classroom. The photo is not the best, but it is a really nice looking globe. 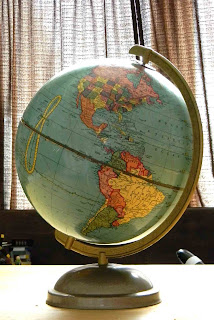 It's a fun globe to look at because there are many countries that have different names than they do now. I'm sure some of the borders are different as well. There are some countries in Africa that existed until 1960 so this globe had to be made in the early 60's. My son and I will have to look at it some more and see what else we can find out about the countries on this globe. It would be a good history lesson for the both of us. ﻿
Posted by Stacy at 10:44 PM